Here is a recap of the MINIs on the Dragon event from Club member Francis:

Our trip started in Chicago with a 6 car train headed to Indy and
stopping in Florence KY.  (Gabe/Ken, Steve/Matt, Mark, Taylor & Paul) Speeds were..  umm excessive at times, but not too crazy.I think I remember seeing my speedo hit 100 only a couple of times during the trek.

With the help of a scanner and a radar detector, we made good time to Florence. After a brief overnight stay, we took off again in the morning. We headed down I-75 to Knoxville then ended up through Deals Gap, NC and finally to Fontana Dam, NC.  Now the fun begins!!!

We arrived at the beginning of the Dragon around 3pm Thursday. No amount of
reading can prepare you for what you’re about to experience. I rode #2 in the train.  Early on, I realized I should stay in 2nd gear and stay off the breaks as much as possible.  Not sure which curve this happened, but I had my first OH S#%! Moment on the Dragon.  We were making a hard left onto a short straightaway and the 1st MINI called out a semi approaching. That was about as close to a truck’s tires as I wanted to get while moving. I made it ok, but someone in the train almost lost it by overreacting.  Whew!!!  We reached Deals Gap and I decided to be the Tail of the train and take it easy.  We reach Fontana w/o incident. We gather at the Welcome Dinner and start to settle in. We see Conrad for the first time and get reacquainted. Later that evening I make friends with owners from ‘Sota MINIs and chat for a while.

Day 2 started off slow. We missed the MINI parade because we were beat.
We made it to the Panoramic pic at the base of Fontana Dam. I took off shortly afterwards b/c it started to pour buckets.  Can’t have that happen with the top down, now can we???  Later that afternoon after getting to send off a couple of emails and eating lunch, we decide to slay the Dragon in the rain.  Hmmm .  I don’t think I’ll do that again. Then again…
We head off thinking the rain was supposed to stop.  We get a few miles into the Dragon and the rain lets up. We start to push it a bit, but then it starts to rain again. This time, even worse than before.  I’m riding Tail in a train of 4 MINI’s.  The front car is calling out turns and hazards.  So I’m accelerating out from a hard right onto a straight.  4 cars pass and I think the coast is clear. I’m approaching a hard left and start to see headlights. Next thing I know, I have a minivan straddling the yellow lines coming at me. OH S#%! Moment #2.  I slide as far right as I can. I’m driving on the white line hoping to get by.  Whew!!!  We motor another few miles and make a pit stop, turn around and head back to the village w/o incident.

After arriving at the village, I head to the cabin and take a nap.  I needed it after that.  I wake up b/c someone on the FRS radio is looking for the location of the Beer Swap…hmmm, I don’t know where it is.  It’s not on the map and my buddies (Paul/Taylor) are not back.  I take off looking for them and run into them finally. I almost missed the BBQ but made it in time for the real festivities.  Had a great time chatting and hanging out with everyone.

The next morning, I decide not to do any driving. I ride shotgun (with Taylor) and start to take tons of pics. We do a scenic drive around the Smoky Mts and head home early.  We walk around and chat some more and start to hang out to get ready for the final dinner and ice cream social. I get to watch the MINI’s head off to slay the Dragon at night, but decide it would be better if I didn’t tempt fate that night.

The next morning at the crack of dawn, we head out for a full day of motoring to finally arrive back home.

While driving the Dragon was the initial reason to go, meeting all of the people you read  about on NAM and other sites was the highlight of the trek. I got to know our CMMC  group a lot better after this trip and met so many others. I can’t wait for MOTD 2007.

Check out my pics and enjoy.  I know I sure did!!!

11 thoughts on “MINIs on the Dragon (MOTD) Wrapup” 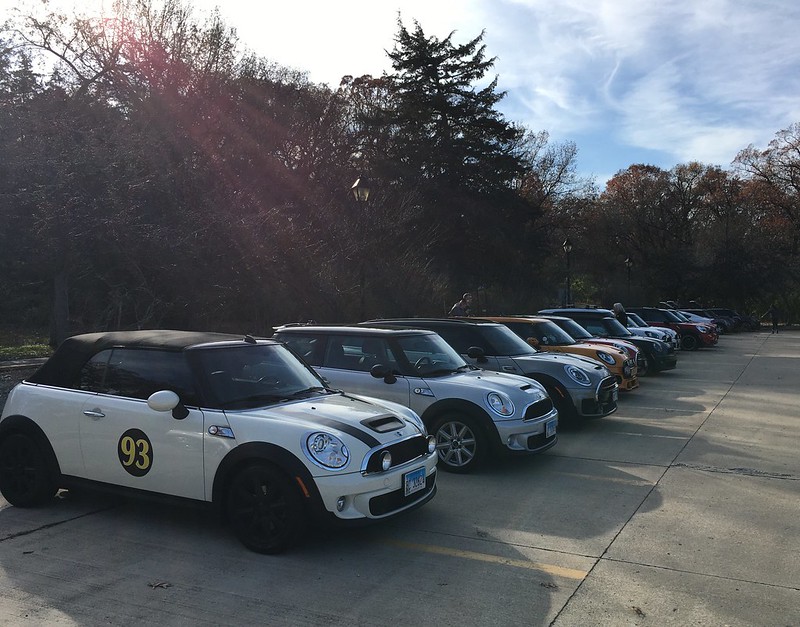